Occassional Cocktails may earn compensation from purchases made after clicking links on this page. Learn more Here.

A Cinnamon toast crunch shot is reminiscent of the cereal with the same name. It is a sweet, cinnamony, creamy shots that is super easy to make. This dessert shot is right for almost any occasion.

What is a Cinnamon Toast Crunch Shot?

With the sweet flavor of this drink it can actually be served either as a shot or a cocktail. If you’d like to serve it as a cocktail you simply multiply the ingredient amounts by two and serve it in a rock’s glass instead of a shot glass.

What is Fireball Whiskey?

Fireball whiskey is based on a Canadian whiskey combined with cinnamon flavoring and a sweetener. It is 66 proof or about 33% alcohol by volume.

RumChata is a cream base liqueur which includes Caribbean rum, cream, sugar, vanilla and cinnamon flavors. It is a lower percentage alcohol liqueur at around 13.5%.

The cream and RumChata is homogenized and therefore does not need to be kept refrigerated. Although you can refrigerate it if you prefer to drink it chilled.

When should you serve the shot?

This shot is considered a dessert shot due to its sweet flavor. It’s relatively cheap and inexpensive ingredients and it’s fast mix-up time make it great for many occasions such as:

How to make this drink:

The drink is super easy to shake up. It takes virtually no time at all and can be made either as a shot or by multiplying the ingredients can be made as a cocktail.

Note: if you’d like to make this as a cocktail instead of a shot you can replace the shot glass with rocks glass.

Start up by rubbing your glass. Or a little bit of sugar and cinnamon onto a saucer. Mix them together so that they are thoroughly mixed and just in a thin layer.

Wet the rim of your shot glass by rubbing an ice cube around it. Rub it back and forth until the rim is thoroughly coated.

Note: you can use a variety of different garnishes for this drink. You can do a cinnamon sugar rum like stated above. Or you can crush up some Cinnamon toast crunch cereal and rim your glass with that. Or you could even add a dollop of whipped cream on top of the shot.

Fill your cocktail shaker up with ice. If you’re making a cocktail instead of a shot you’ll also want to fill your rocks glass with ice.

Measure .75 oz of RumChata using your jigger. Then, pour your RumChata into your cocktail shaker.

Measure .75 oz of Fireball using your jigger. Then, for your Fireball into your cocktail shaker with your rumchata.

Place the lid onto the top of your cocktail shaker and shake well. You should shake the Shaker for around 15 or 20 seconds or until it’s icy on the outside.

Take the top off of your shaker. Place the Hawthorne strainer onto the top of your cocktail shaker. And strain your drink from your Shaker into your shot glass.

Your shot is ready to knock back and enjoy! 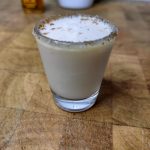 « The Ultimate B-52 Shot: A layered surprise
Crispy Crunch Shot: candy bar in a glass »

We  are a participant in the Amazon Services, LLC Associates Program, an affiliate advertising program designed to provide a means for sites to earn advertising and linking to Amazon.com. As an Amazon Associate we earn from qualifying purchases.

Please drink responsibly.  Follow all local/federal alcohol laws.  We are not advocating underage or irresponsible drinking of any kind.