Occassional Cocktails may earn compensation from purchases made after clicking links on this page. Learn more Here.

The Gin Buck is a gin lover’s dream. It perfectly combines the natural botanical flavors inherent to gin with the citrus bite of lemon or lime juice. Once you learn how to make this drink you’ll likely never want to make anything else!

What is a Gin Buck?

A Gin Buck, also sometimes called a Gin Moscow Mule, is a cocktail combining gin, obviously, with either lemon or lime juice, and then topped off with either Ginger Ale or Ginger Beer.

Some use Ginger Beer because it has a stronger flavor compared to Ginger Ale. While Ginger Ale typically consists of soda water and a sweet, ginger flavor syrup. Ginger Beer is made by fermenting ginger root with sugar and yeast for about two to three days. It is considered non-alcoholic but technically will have some trace amounts of alcohol. You can use either Ginger drinks based on your personal preference.

Some similar drinks to a Gin Buck are a Vodka and Ginger Ale, Vodka Rickey, and Gin Rickey. Plus, there are a ton of other great cocktails with Ginger Ale you might enjoy too.

What makes a drink a Buck Cocktail?

A “Buck” cocktail, also known as a “Mule” cocktail is when a liquor is combined with a citrus juice and either Ginger Ale or Ginger Beer. The “Mule” name is believed to have come from a Vodka Buck which is more well known as a Moscow Mule.

According to Maker’s Mark, it has been said that the “Buck” name comes from an older, non-alcoholic drink called a Horse’s Neck (I have no idea where that name comes from). That drink consisted of Lemon juice and Ginger Ale.

Legend has it that someone decided to throw some whiskey in with it (because, why wouldn’t you?) to give it a kick. Another term used when a horse kicks is bucking. And, thus, the Buck style of cocktails was born. Who knows if that story is true, but it’s fun to think it is anyway.

Now, let’s get this recipe kicked off (see what I did there?)!

How to make this drink:

A Gin Buck is really easy to make. You just need a few ingredients and minimal equipment.

Fill your highball glass with ice.

Put a lime wedge on the glass to garnish and enjoy! 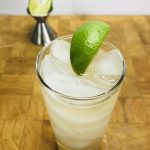 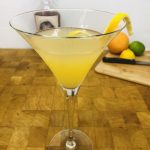 Bourbon Sidecar: A Twist On A Classic 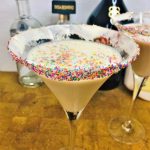 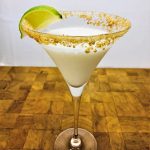 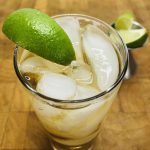 We  are a participant in the Amazon Services, LLC Associates Program, an affiliate advertising program designed to provide a means for sites to earn advertising and linking to Amazon.com. As an Amazon Associate we earn from qualifying purchases.

Please drink responsibly.  Follow all local/federal alcohol laws.  We are not advocating underage or irresponsible drinking of any kind.